"... fit for a prince...", that's how Tirolean topographer Beda Weber described Bruck Castle. For more than 750 years, the castle built by the Counts of Gorizia towers above Lienz town, massive yet plain at the same time – and offers a surprising diversity. Its walls were once a symbol of power and residence of the Counts of Gorizia.

You can still find many traces of their stately presence, such as the Hall of Knights with its elaborately adorned Romanesque beamed ceiling, or the frescoes of the castle chapel with their impressive rich colouring and artistic strength from the second half of the 15th century – their quality likely unmatched in the Alpine region. But the former residential castle impresses not only with its history, but as the museum of Lienz town offers visitors an internationally respected exhibition programme on more than 1,000 m2 with annually changing special exhibitions featuring culture, nature and regional history. 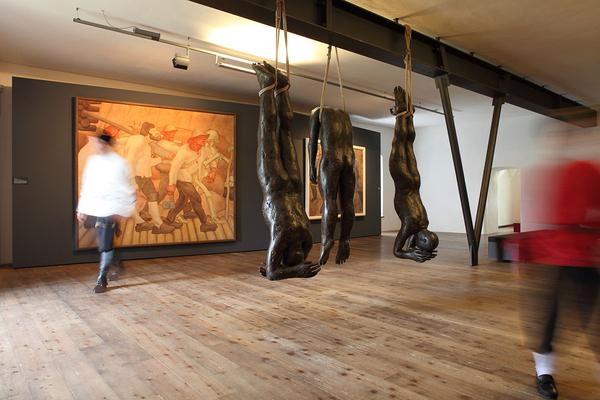 The exhibition of the works of Albin Egger-Lienz in the impressive castle rooms leads visitors from the beginnings of his creative work, which still bears a strong resemblance to the former East Tirolean role models Franz von Defregger and Hugo Engl, all the way to his visually stunning and haunting later works focusing mainly on hard work, war, life and death. The more than 100 originals on display in the permanent exhibition "I do not paint peasants but shapes" let the artist appear between the poles of historical painting, modernism, abstraction and "regional art".

The castle itself also serves as a stage for events by Lienz cultural office. Theatre, concerts, readings and soirées complete the varied programme of the Museum of Lienz Town. Nestled amidst a picturesque nature park, Bruck Castle provides a peaceful and relaxing setting and visitors can enjoy the view of the Lienz Dolomites from the castle café and its sun terrace. And many happy unions found their beginning in the romantic ensemble by the Lienz castle hill, which is not only a popular photo setting for bridal couples, but also makes civil weddings in the castle's jewel in the crown, the castle chapel, into an unforgettable experience.